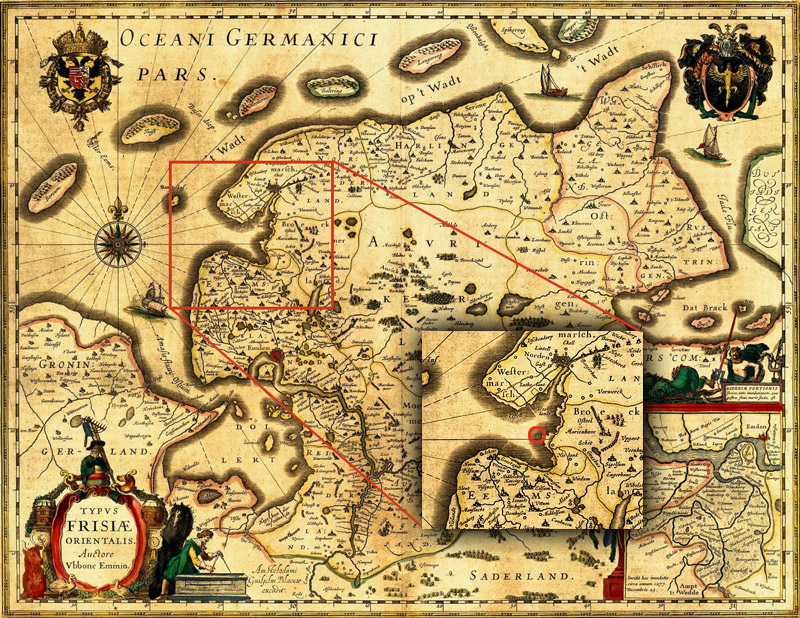 On the map „Frisia orientalis“ drawn by Ubbo Emmius around 1600, the area of the Schulenburger Polder is still represented as being part of the North Sea.
In the place where around 1600 a big bay was shown, the village Westseel, headquarter of the chief’s family Manninga used to be located until wiped out by the Dionysius Floods in October 1374 and from October 8th to 10th 1375 (the day of St. Dionysius is October 9th). With regard to this township, Ubbo Emmius wrote in the 1590s:

“On October 9, 1373 (!) a big flood of unprecedented proportions occurred. It spread over the entire Frisian coast bringing a lot of misery to its inhabitants. It engulfed the picturesque village of Westseel located in a fertile area at almost 2000 feet towards the South of Norden, facing towards the sunrise in the East, with such a huge quantity of water that all buildings including the church were torn down and destroyed. Parts of the area were consumed by the floods, vanishing animals and humans.“

Starting in the East the people began to dam up the lost land during the following centuries. First spur dykes so called “Buhnen” (rows of poles packed with brushwood running perpendicularly to the dyke line), that can still be observed today, were built in front of the outer dyke. These “Buhnen” slowed down the water’s velocity, allowing for sediments to be deposited and accumulate in the area.

Once enough sediment had accumulated the Buhnen were closed on the sea site, leaving an opening for water to flow in and out. This accelerated the process of sediment accumulation which is called “Anlanden”. During this process an outland (“Heller”), a piece of land covered with grass and used to graze cattle, was formed.

Once a big enough piece of outland had formed, a new outer dyke line was built in front of the old outer dyke. The newly gained piece of land between the former outer dyke (now called sleeping dyke “Schlafdeich”) and the new dyke is called “Polder”.

Originally the Klein-Schulenburgerpolder was to be dyked in together with the Groβ Schulenburgerpolder adjacent to the North. The ensuing polder was planned to be named in honour of the Minister von der Schulenburg.
During or right after the diking in 1774 the dam failed, presumably in the area visible on the satellite picture marked by a blue arrow.
Since normally a deep scour (“Kolk”) forms at the place where the dam break occurs it is very difficult to repair a broken dyke by re-establishing the original dyke line.
Due to this and to the fact that the people involved in the construction could not come to terms on how to proceed in the southern areas affected by the dam failure, the Groβ Schulenburgerpolder was closed off to the South with a wing dyke (“Flügeldeich”) to what would be known as the Klein Schulenburgerpolder in the future.

It is assumed that the barn part of the Gulfhof Klein Schulenburgerpolder was built in the 1780s, while todays living quarters were built in 1842.

With approximately 46 hectares of high-quality marshland soils the Klein Schulenburgerpolder provided an existence for over 150 years. First for a Farmer’s family with maids and farmhands, and later on only for a farmer’s family.

Approximately 20 years ago with improvements in technology and increased mechanization, agricultural lands became bigger and bigger, diminishing the profitability of an agricultural business with 46 hectares more and more. Nowadays (2015) 200 hectares of land are necessary for a functioning agricultural enterprise.

In 2011 Klein Schulenburgerpolder was taken over by a large agricultural firm, at which point in time the old farm house finally became irrelevant for farming purposes.
The building is not suitable for storing today’s farm equipment, nor can it accommodate modern day animal herds

To preserve the building including the barn and to put it to a meaningful use, the front part of the building was transformed into vacations homes between 2013 and 2014.